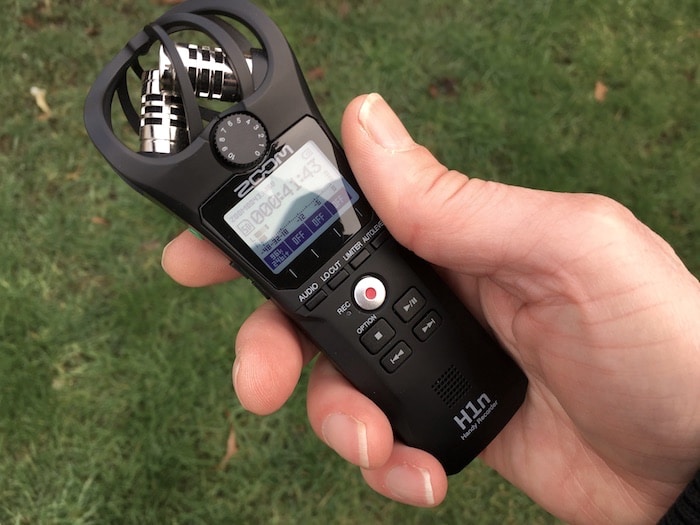 The Zoom H1n is a small, pocketable audio recorder which can record high quality audio with its built-in mic or an external mic.

It replaces the Zoom H1.  That was popular with ultra low budget filmmakers because it was small and extremely affordable, though it had some frustrating limitations. How does the new device compare?

First question: why would you need an audio recorder? Well, they’re really useful for filmmaking. Here are a few ways to use them:

Connected to an SLR or mirrorless camera

SLRs and mirrorless cameras aren’t great for recording live audio. Some lack headphone sockets, or have weak internal audio circuits. With a recorder, you can capture a completely separate stereo audio track, then sync up the sound when you edit. You can either use the Zoom’s built-in stereo microphones, or connect a lav or other minijack microphone. You can then connect the Zoom’s headphone socket to your camera’s audio input. If your camera doesn’t have a headphone socket, just plug a two-in-one splitter into the Zoom headphone jack.

As a separate recorder

Your Zoom doesn’t have to be connected to your camera. For interviews, or even for drama scenes, you can mount it on a mini-tripod closer to your presenter or actor, then sync the sound later. If you’re recording a complex scene, you could hide two or three Zooms in different positions to make sure you get all the sound you need.

Instead of a wireless mic

Can’t afford a wireless setup? Connect a lavalier (tieclip) mic to a Zoom in your talent’s pocket, then sync the sound afterwards.

Proper directional boom microphones are expensive. So I’ve put my Rode VideoMic Pro on a boom, and connected it to a Zoom H1 clamped to the boom. Once again, you sync your video at the editing stage.

Sometimes the sounds you record live just aren’t suitable, and the sound effects in your editing program won’t do the job either. So you can use the Zoom as a field recorder and go and look for them. Because it’s so small, you can put it on a boom pole or adapted monopod to get it close to the audio source.

I’ve used all of these setups with the original Zoom H1, and it worked pretty well in most of them. But it did have some major drawbacks, mainly that it was useless in any kind of wind. Even a $35 Redhead windscreen from Hawaii couldn’t fix that, because wind noise across the body would be transmitted to the microphones. The device was also very sensitive to handling noise.

I think the original was really meant for musicians, which is why it doesn’t work well outdoors. Now Zoom have redesigned it and added some specific filmmaking features.

The new model looks and feels better made, with a matt plastic body. Size and shape are almost identical, though the main body is a fraction wider and thinner, and the microphone cage is more substantial. There are useful detail changes: the body is shaped to make it easier to handhold, and the battery compartment opens much more easily. 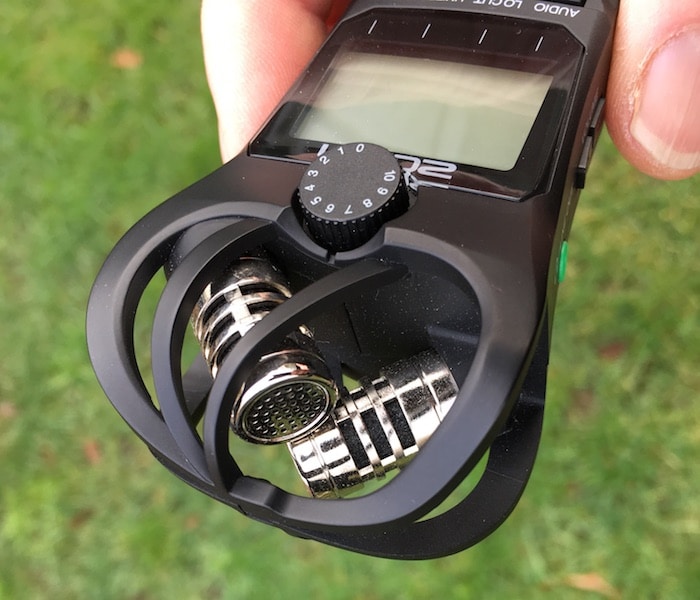 As with the H1, the microphone configuration is X-Y (a crossed pair) which provides a good stereo image. The microphone capsules themselves look similar but they’re better protected. Like the old model, the H1n can record MP3 or WAV with a maximum quality of 96KHz 24 bit.

It records to microSD cards. Like the H1, it has a small built-in speaker and can provide plug-in power to unpowered mics. There’s a USB socket to connect it to a computer (you can use it as a USB voiceover microphone). It takes two AAA batteries rather than the H1’s single AA; you can also power it from an external USB battery pack. 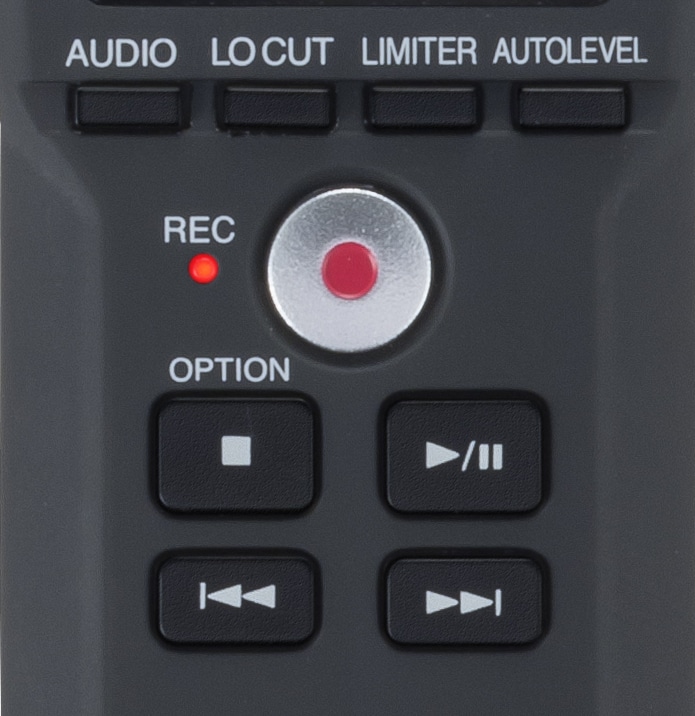 There are some big changes to the controls. Some of the H1’s settings were on the back, which could be inconvenient. Now you can access the main controls and settings from the front (power on/off, delete and headphone level are on the sides). There’s also a physical dial for making rapid adjustments to the audio input level; record and playback controls are close together.

Four function buttons allow quick access to audio format and bit rate; a lo cut filter; a new audio limiter; and auto level.  The Stop button works as an option key – when it’s pressed, the function buttons can enable auto record, pre-record, a self timer and sound mark. The sound mark generates a tone when you press record which you can use as a slate to match camera and recorder audio.

In playback mode, you can add marks (eg to pick out key moments from an interview), check info about the recording, repeat and select sections. You can also adjust the playback speed for easier reviewing and transcription, and apply basic effects (adjusting for speech, volume cut, ‘rock’ and bass.)

Pressing Stop and Play buttons together outputs a reference tone, for setting audio levels on the camera. 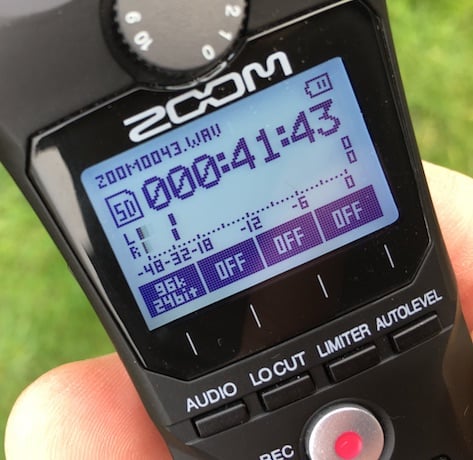 The backlit monochrome LCD screen is brighter and more informative than the old one.

Like its predecessor, the H1n can record a beautiful stereo image from its internal microphone. But unlike the H1, it’s genuinely usable outdoors. The booming wind noise that plagued the old model has disappeared. You do still need a furry windshield: the Redhead works well (though it partly obscures the screen and dial) or you could use Zoom’s own WSU-1.

Handling noise is also reduced, but you still need to be careful. In my tests, I mainly mounted the H1n on a Gorillapod, while the tests at the beach were on a Manbily monopod (reversed as a boom pole). But I held the device body in my hands for the final clip in the park, and you can hear some slight handling noise.

It’ll also pick up camera noise if you mount it directly to a hot shoe: you need a suspension mount, especially if you’re handholding the camera.

You can get slight hiss with some external microphones, depending on their output level. It’s excellent with the Rode VideoMic Pro (on +20dB output) though I was disappointed with the quality from the Boya BY-M1.

I did these tests in different conditions: speech indoors and outdoors using the built-in microphones and a couple of external microphones. I also tried using it for recording feet walking on pebbles, waves lapping on the beach, and ambient sound in the pier and in a park.

I’m really pleased with the H1n, particularly with the results from the built-in microphones. The new controls and options are useful, but for me the biggest plus is the lack of wind noise. It’s extremely useful to have a pocketable recorder that can capture good stereo sound in most conditions.

The H1n is great for filmmaking, and a good introduction to audio field recording. It costs about a third more than the old H1, but it’s still one of the most compact and affordable recorders you can buy.

Disclaimer: Zoom sent me a free H1n to test, but I haven’t been paid to write this review.