The Filmmaker’s Eye: Learning (and breaking) the rules of cinematic composition

This is one of those rare filmmaking books that delivers more than its title promises. The Filmmaker’s Eye is about a lot more than just ‘the rules of composition’: it’s a beautifully illustrated, systematic guide to the visual language of film. Writer Gustavo Mercado wants you to pay attention to every detail when you set up a shot, and to make sure that every shot contributes to the story. And as an award-winning indie filmmaker and professor of film, he understands film theory and the practical aspects of filmmaking.

The introduction uses a single still (from Jason Reitman’s Up in the Air) to show how one well-composed shot can help us understand a character and their place in the story. Then there’s a cautionary tale: a disastrous student film screening where the audience was baffled and misled by irrelevant details. The third chapter, Image System, uses Park Chan-wook’s Oldboy to show how a consistent approach to  visual language can support and enrich film storytelling.

After some explanations of technical fundamentals, we get to the meat of the book: 25 separate short chapters, each devoted to a specific type of shot. These cover different shot sizes (from extreme long shot to extreme closeup), narrative functions (including establishing shot, subjective shot, emblematic shot), and movements (e.g. pan, dolly, Steadicam and sequence shot).

Each chapter starts with a description of the shot, then analyses an example taken from a real film. Mercado then goes through the technical aspects you need to consider, like camera and lens choice and lighting. The section ends with a shot, taken from a different film, that ‘breaks the rules’. 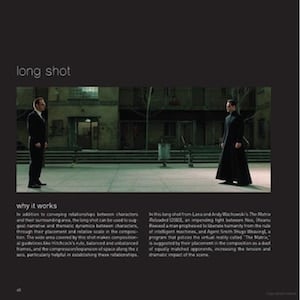 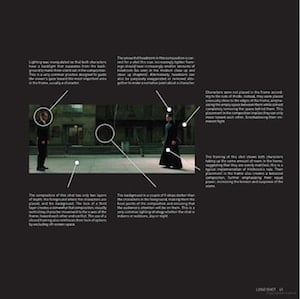 The pages above are taken from the ‘long shot’ section, which focuses on a shot from The Matrix and uses the final scene of Michael Haneke’s Hidden as an example of rule breaking.

The illustrations are a large part of what makes this book so useful and enjoyable. Where many film books use muddy black and white images, The Filmmaker’s Eye makes lavish use of full colour stills. Mercado uses well-chosen shots from over 75 different mainstream and indie films and classics, from Thelma and Louise and City of God to Touch of Evil. Most if not all of them are available on DVD or online.

What’s not to like? Not a lot. If you’re used to learning filmmaking from bite-sized online videos, you might find Mercado’s writing style a bit ponderous (and he does assume a basic understanding of filmmaking terminology). But because the chapters are so short it’s easy to dip in and out.

You’ll also need to bear in mind that the book was published in 2010, just before the DSLR/large sensor video revolution, so some of the technical information is out of date (it assumes that you’ll either be shooting on film or on small sensor video cameras). But that doesn’t detract from the wealth of useful information it contains. Almost any filmmaker can learn something useful from this book.