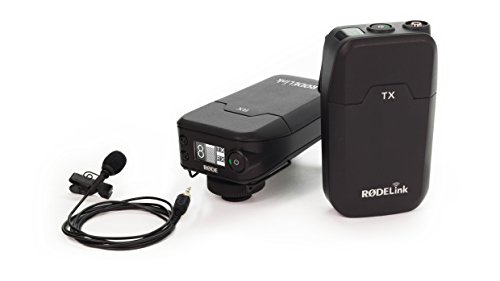 Recording live speech, like interviews and presentations, is a challenge for low-budget filmmakers. Audio from the built-in microphone will usually have issues with background sound. Directional on-camera mics can be a bit better, but they get increasingly useless as the subject gets further away from the camera. Use a lavalier mic and people have to be connected to your camera by wires. (You could plug them into a separate audio recorder and sync them up later, but if you do that you can’t monitor the sound while you’re filming.) Boom mics need a second person to operate them, which makes your team very conspicuous and removes a lot of spontaneity.

Rode recently launched their new digital Rodelink wireless system. It’s designed for easy setup (up to 8 channels can be ‘set up in seconds’), it has a claimed 100-metre range, and broadcasts on two channels simultaneously for reliability. The basic Filmmaker Kit costs around $400/£280 which is significantly cheaper than competing pro systems. It includes a transmitter with belt clip, a receiver which mounts on the camera’s accessory shoe, and the excellent Rode Lavalier mic with foam and furry windshields.

I bought one to use on a youth film project over the summer. It really is easy to use: press one button on the transmitter and another on the receiver, wait for the display to tell you that it’s connected, and it’s ready to record. It runs on standard AA batteries  – two each in the transmitter and receiver – and battery life seems good. The receiver has a switchable output (0dB, -10dB, -20dB) to adapt to different cameras. It has a minijack output, but I used Rode’s inexpensive minijack to VGA adaptor to connect it to my XA20.

Verdict? It’s great. The young people found it easy to use and audio quality was very good. It worked every time, though we didn’t test the extremes of the claimed operating range. We used it indoors, outdoors, and in rooms with a lot of background noise. (It picked up the background noise, but you could still understand the speech.)

One point: the transmitter is bit bulkier than competing systems, which might make it harder to conceal under costumes. But for presentations and interviews, it’s a no-brainer. For about the same price as a decent directional mic, boom and windshield, you get a much less obtrusive kit that you can use single-handed.