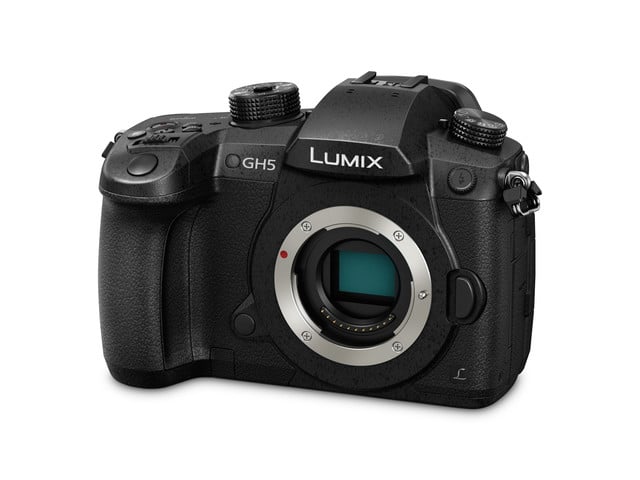 The GH5 is weather-sealed, frostproof (to -10C), and can shoot 4K and HD in a range of broadcast quality formats without needing an external recorder. It has a very high resolution electronic viewfinder and a multi-angle touchscreen.

I hired one recently: it’s a solid, well-made workhorse with good controls and clear menus. The IS lock feature is remarkable – for static shots, it’s like filming on a tripod.

The GH5 can shoot 4K, in 10 bit, 4:2:2 at up to 30p internally. That means it records more information than the usual consumer 8 bit, 4:2:0 format,  so your footage will stand up better to colour correction, grading and effects.

It has five-axis in-body image stabilisation for easy handholding. Panasonic recently updated the firmware to provide IS Lock, which lets you get very steady static shots without using a tripod.

The viewfinder is very sharp, with over 50% higher resolution than the previous GH4 or Canon’s EOS M5. That makes eye-level shooting a good option, even for stills.  The touchscreen resolution is as high as Canon’s pro 5D Mk IV.

With a paid upgrade (£83), you can shoot V-log with a 12 stop dynamic range. (Dynamic range means how well the camera deals with contrast). V-log is a flat picture style which compresses highlights and shadows, and is designed to be corrected or graded afterwards: the GH5 lets you preview how the footage will look once LUT correction is applied.

It has microphone and headphone sockets, and two built-in microphones (one of which is for noise cancelling).

The MFT (micro four thirds) sensor is smaller than Canon’s APS-C and the full frame format used on some Canon and Sony cameras. That means you can’t get quite as creative with shallow depth of field, unless you add an expensive Metabones Speedbooster adapter to fit lenses designed for larger sensors. But for documentary and events shooters, more depth of field may be a bonus as it means fewer focus errors.

Panasonic’s colours, out of the camera, aren’t as good as Canon’s – though the GH5 has better colours than previous Panasonics. But being able to shoot in 10-bit 4:2:2 should make the footage easy to correct and grade.

Low-light performance isn’t as good as the exceptional (and much more expensive) Sony A7S Mk II, though it’s much better than the older GH4.

Continuous autofocus isn’t as good as competitors when shooting at 24fps.

It’s bigger and heavier than its predecessor, the GH4.  But that’s relative: at 725g it’s still slightly lighter than the lower-spec Canon 80D, and only 100g heavier than Sony’s A7S II.

Should you buy it?

For documentaries, news and events, the combination of broadcast quality 4K, easy handholding, interchangeable lenses and pro audio looks unbeatable at this price.

For better low-light performance and video features (but no image stabilisation) at a significantly higher price, you could get the Panasonic GH5S.

The BlackMagic Pocket Cinema Camera 4K has many pro video features at a lower price, but it’s less convenient and robust.

Filmmakers who want a ‘cinematic’ look might find the small sensor limiting. If you don’t need to shoot 4K, the Canon C100 might be a better choice. If you don’t need the GH5’s pro features, the G80 (G85 in the USA) has the same great image stabilisation (but not the IS lock) in a smaller body for less than half the price.

This video from RomsProd on Youtube shows how a pre-production GH5 performs in low light: it looks good to me.

Kaimon Wong and Dan Chung from Photo Gear News tried out the autofocus and in body image stabilisation.

Update: The new GH5 II has some improvements over the original, notably a higher resolution screen, better image stabilisation and 4K, 10-bit slow motion (60fps), with V-log recording included rather than a paid upgrade. It costs around £250 more than the older version, which is currently still available.