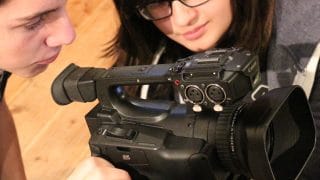 The filming stage will be a lot easier if you’ve followed the planning guidelines first.

If you’re just shooting a record of a place or event you might not need to follow a storyboard or script. But you must have an idea of what you’re going to film, even if it’s just a simple shot list. Make sure you get a variety of shot sizes: extreme long shots to show the place, long shots and mid shots of people, and plenty of closeups of people and things.

Are you ready to start filming?

You need to set up each shot carefully. You may need to move the camera to a different position to get the framing, the light and the background right.

Getting everything you need

Coverage means making sure you’ve got all the shots you need for your scene, so there won’t be any awkward jumps or gaps when you try and edit it together.

For short factual items, you can follow a rule of thumb: if you’re showing a person doing something, film a couple of long shots or very long shots to introduce the setting, then make sure you get shots of the person, the thing, and the person with the thing. Always film a couple more shots than you think you need.

One way to make sure you’ve got coverage is to film a master shot: a long shot or very long shot of all the action. You should also shoot cutaways – details of other parts of the setting. You can then cut back to these shots to cover any problems or gaps when you edit.

If you’ve only got one camera and you’re shooting a drama scene, set up the camera for a master shot in a position that will cover the whole action, then film the actors doing the whole scene, before you film the mid shots and closeups.

If it’s a live event or performance, you’ll need a second camera for this. Set it up on a tripod where it can cover the whole action, start it and leave it running. Remember that SLR cameras can’t record very long clips, so if the event lasts longer than the maximum clip length you’ll need to use a camcorder instead.

If you’re cutting between closeups of two actors talking to each other, film the whole scene with the camera on actor 1, then move the camera round to face actor 2 and film the whole scene again. You can then cut between these two shots, and the cutaways and master shots, when you edit. You can use exactly the same technique for interviews. Remember to follow the rules of continuity so that the shots will work together

How much to film

For things that don’t move, or general shots of scenes or people, shoot at least ten seconds of each shot.

For scenes with people talking or acting, you need to ‘top and tail’ your shots. Start the camera a few seconds before the action starts, and leave it running for a few seconds after it ends. If you’re working on your own, the best thing to do is to start the camera and check it’s recording, count slowly to five, and then give the actors a hand signal or shout ‘Action’. Then when they’ve finished, count another five seconds before you stop.

If you’re working as a team, you can follow some version of this drill:

Get the location sound

You should always record at least half a minute of background sound from the location, without dialogue. This is called atmos, wild track or room tone. It can be really useful when you edit.

Ask everyone to be quiet, then leave your camera or audio recorder running for thirty seconds.

If you’re filming at a location with interesting or distinctive sounds that might help tell your story, record them separately as well.

The next stage: Editing and sharing