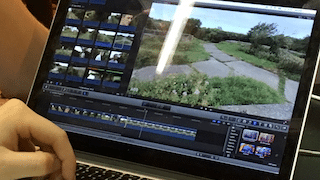 Once you’ve shot your film you need to put it together and get it ready for sharing. This stage is called post-production.

Video editing is much easier if you get organised before you start, and follow a plan.

This page is about the video editing process.  I’ve also written a guide to basic editing principles.

Get ready to save and backup

You can lose hours of work if your editing program crashes before you save. Set your program to autosave regularly every five or ten minutes. (You don’t need to do this with iMovie and Final Cut Pro X as they autosave continuously). If there’s no autosave, set a reminder and save manually at regular intervals, and before you make any big changes.

You also need a backup plan. You can’t take the risk of losing your original video files, or project files that you’ve spend days working on.

For serious projects, I keep backups of all my video footage, and my projects, on a separate drive to the main computer. I backup every hour or so to the external drive, duplicate that to another drive at the end of the day, and keep the second drive in a different location.

Find out where your program keeps the files, so you know which ones to back up (read the manual or online help). Don’t just back up the project files: you need backups of the media as well. Some programs bundle everything into one project file, which makes it easy to copy and backup.

With most editing programs, the project file doesn’t include the actual video files that you imported from your camera. These are usually stored somewhere else on the computer or an external drive. If the original files are missing or have been moved, the project file won’t be able to use them and your film won’t play properly.

Choose the stuff you’re going to use

If you’ve only shot a few clips, load them all onto the computer.

If you’ve filmed lots of material, it’s best to check each clip out first. You can use a logging sheet for this. Make notes about each clip and just import the good ones. But don’t delete any clips at this stage unless you’re absolutely sure they’re unusable – they might come in useful later.

Open your editing program and create a project. Give it a name.

Get your video into your editing program

Connect your camera to the computer with a USB cable, or slot the memory card into the computer or a card reader. Then use the editing program to import the clips . If you have a tape camera, you’ll need a Firewire (IIEE1394) lead. Not all computers can accept these.

It’s easy to lose track of stuff on bigger projects. So, if the program lets you, organise your video into separate ‘bins’, ‘folders’, ‘events’ – whatever your program calls them. Name the folders so you know what they are – e.g. not just ‘Untitled 1, Untitled 2’ and so on.

If you planned your film with a storyboard or shot list, it should be pretty straightforward to edit your clips together.

Unpredictable projects, like documentaries and events, are more challenging. For these, I try to work out the edit on paper first, before starting to cut the material together.

There are a few ways to do this: you could use a documentary script template.

If your film is complicated, with a lot of separate sequences, it’s better to work on one at a time before you assemble them all together into the longer film. This is where pro programs have an advantage, as they’re designed to work this way.

For editing drama or action, this is roughly the sequence I’d follow:

This gives me a quick idea of how the sequence is going to work before I start fine-tuning it.

You can work in other ways. If you’re going to use several parts of the same shot (like in a dialogue scene or interview) it’s best to select exactly the section of the shot you want before you drag it to the timeline.

To make a music video or a ‘digital story’ you’ll start with the soundtrack and then fit your shots to it. You can put ‘markers’ on the timeline to see where the cuts should go, either by pausing your film at each marker, or using a keyboard shortcut to insert them as the soundtrack is playing. If your editing software or app doesn’t have markers, you might be able to use the audio waveforms to help.

It’s easy to get bogged down in detail and lose sight of the bigger picture, which is why I always put a rough cut of the sequence together first.

As you adjust your edits, keep going back and seeing how they work together. Every now and then, watch the whole sequence.

Show it to other people

When you’ve got a reasonably good edit together, show it to other people. Get their feedback. Is there anything that doesn’t make sense, or feels awkward to them? If so, revise the edit and show it to them again.

Now you need to fine-tune the edits, smooth out the sound and make sure colours match from shot to shot.

Pay attention to sound levels: make sure it doesn’t get too loud, the levels don’t vary too much, the background sound or music doesn’t drown out speech, and that there’s no dead silence.

Most programs will also let you adjust and correct the exposure, contrast and colour, so that clips match. You can also colour grade your video to give it a consistent style. Some programs include basic colour grading, or you could use a separate program.

Finally you can add titles and credits, either within your editing program or using a separate titling program.

Save and backup your project.

Export a copy of the film at the highest quality. (Until you export your film, it won’t play on another device, or if you delete or move the original media). Then export any lower-quality copies you need. If they’re for video sharing sites like Vimeo, follow their online compression guidelines for best results.

If you want your movie to be screened in front of audiences, you’ll need to work out a distribution strategy. For independent movies, film festivals are the first point for this. There’s a useful international directory of film festivals on the British Council site here.

How to get your edit right

Learn the basics of editing with my new educational resource. Create a short movie from a choice of over 90 clips including movement, action, dialogue and B-roll.

You can get online classes from CreativeLive:

I earn affiliate commission from these links.

Send this to a friend