I earn affiliate commission from some of the links on this page.

Which video editing program should you use? And should you consider editing on your phone? Here’s my roundup of the best editing programs for starting filmmaking. You can get free trials of most of these programs if you want to try before you buy.

You can get simpler editing programs than these, but they’re limited. All the programs here will allow you to add cutaways (a second video track, so the image changes but the sound stays the same); adjust audio levels, and use extra audio tracks. The pro programs (Final Cut Pro X, Premiere and Resolve) give you the option of many more video and audio tracks, and let you make precise adjustments and corrections. 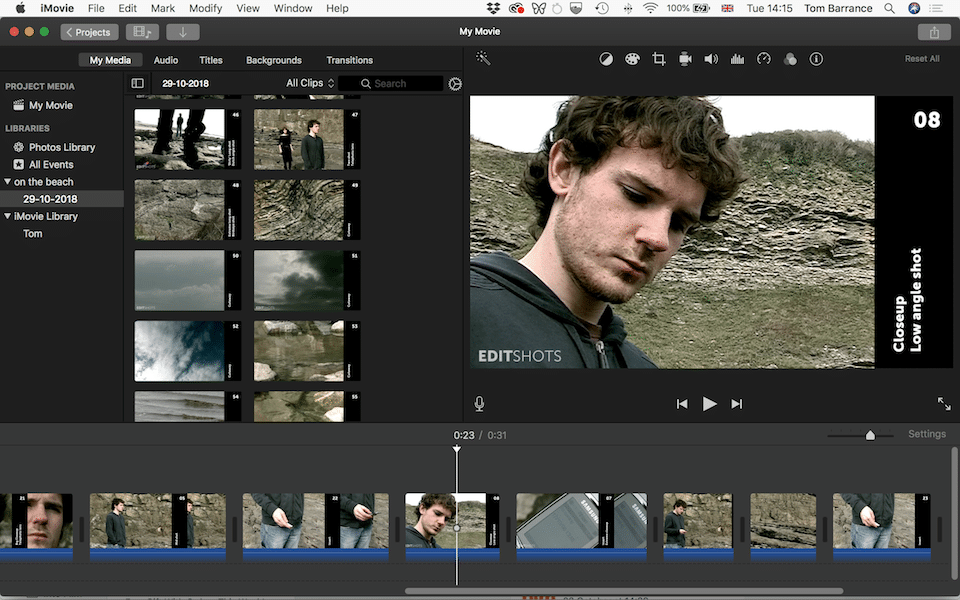 Apple’s own iMovie is easy to learn and use, but it offers a surprising degree of creative control for a free program. You can also import project files made with the iPhone/iPad version. 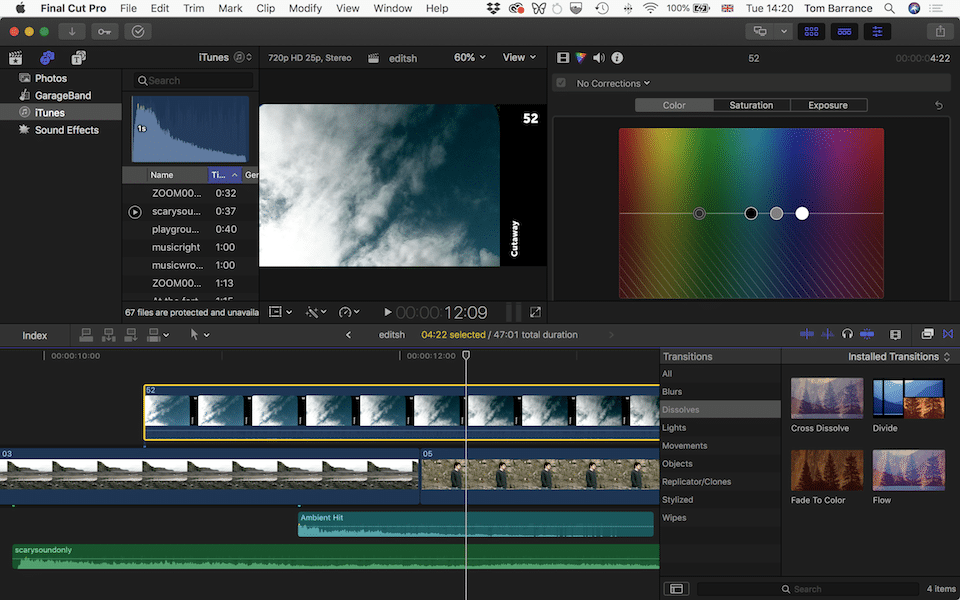 This is the program I use. It’s powerful and fast, with a full range of professional features, but it’s relatively easy to learn: I’ve taught twelve-year-olds to edit with it. It’s the obvious next step up from iMovie as the interface is similar.

If you’ve edited with other pro apps you may find the trackless ‘magnetic timeline’ unfamiliar at first, but it’s really quick and efficient once you’re used to it. One advantage over Adobe Premiere is that it’s a one-off ($299/£299) purchase with free upgrades, rather than a monthly subscription. Students and teachers can get it bundled with other Apple creative apps (Logic, Motion, Compressor and MainStage) at a big discount. There’s a 90-day free trial. 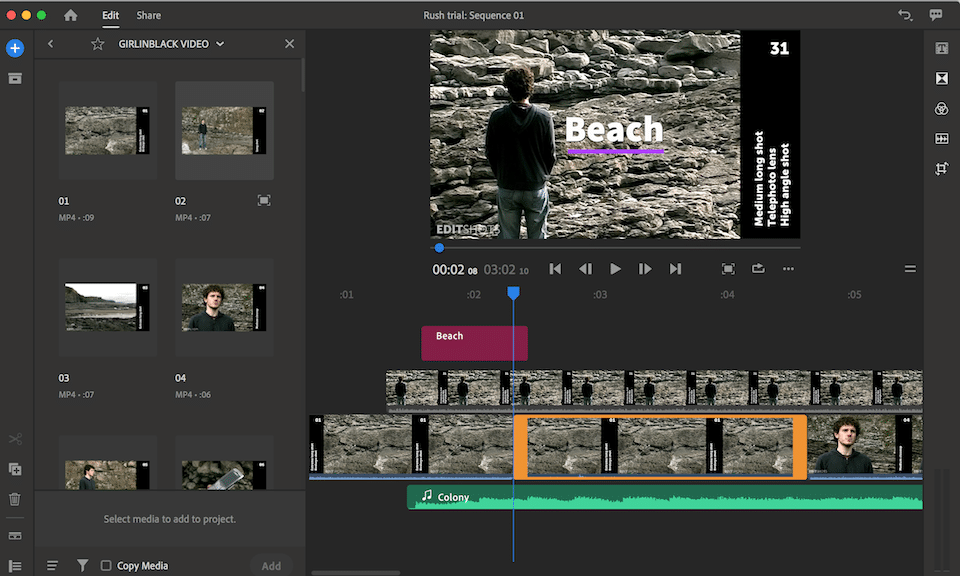 Unlike the other programs here, Adobe Premiere Rush comes in PC, Mac, iOS and Android versions. Android system requirements are high. Designed for YouTubers and vloggers, it’s more user-friendly than Adobe Premiere (below), but has multiple audio and video tracks.

It’s a good alternative to Premiere if you already have an Adobe Creative Cloud subscription. If not, it’s $10/£10 a month on its own, with 100Gb of cloud storage included. 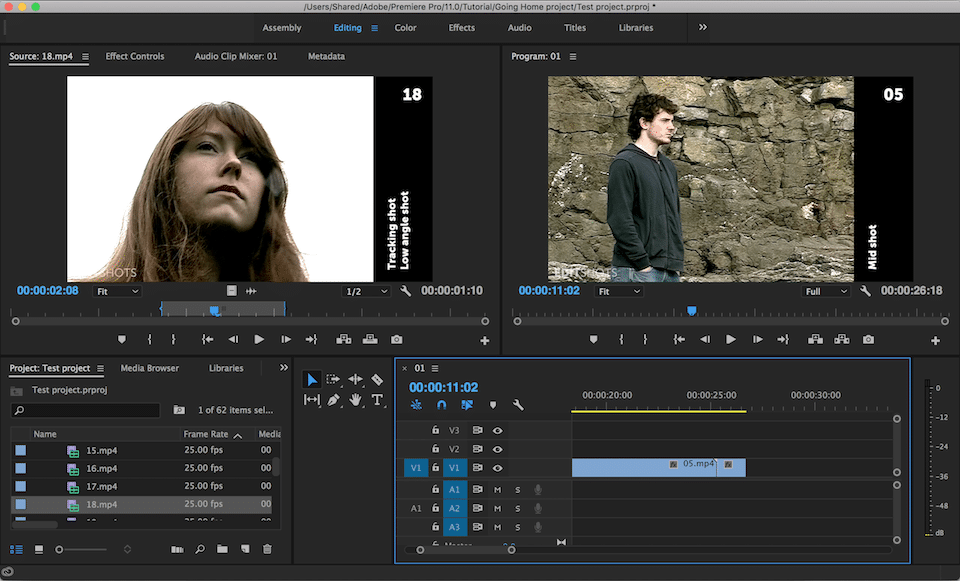 Premiere is one of the most popular pro PC and Mac editing apps. It’s powerful but less user-friendly than Final Cut Pro. Experienced editors may prefer its more conventional interface, particularly for creating movies with complex soundtracks. It’s only available on subscription, either as part of Adobe Creative Cloud (around $53/£50 a month, or $20/£16 for students and educators) or as a single app ($21/£20 a month). There’s a seven day free trial.

It’s a good choice if you, or your college or business, already subscribe to Creative Cloud. It integrates well with other CC apps, including Adobe Audition which is extremely effective for removing continuous background noise. 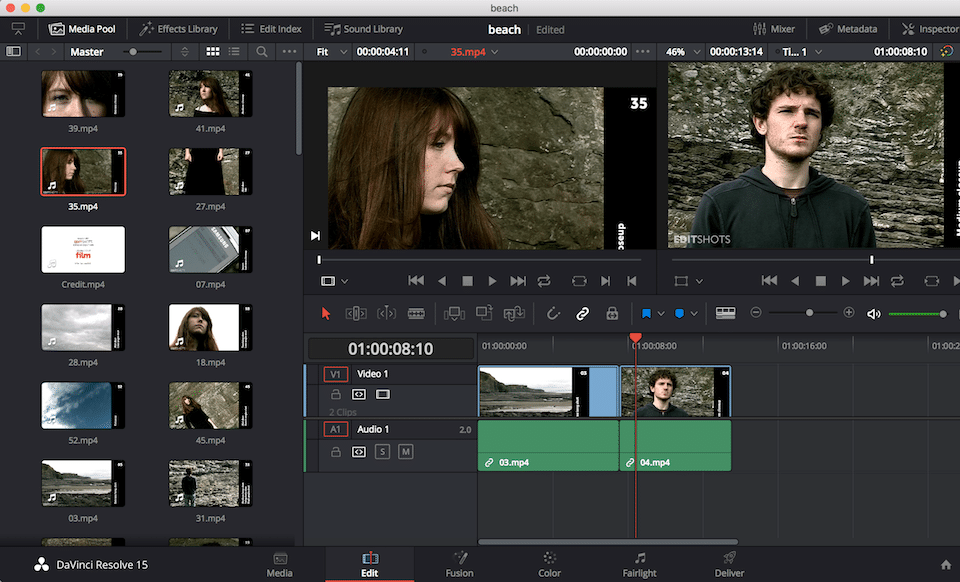 If you’re looking for a free pro editing program for PC or Mac, you could choose BlackMagic’s Da Vinci Resolve. It’s particularly good for colour correction. But it’s complex and you’ll need a powerful computer. To edit 4K or 10-bit footage you’ll need the $300/£239 Studio version, which is included when you buy a BlackMagic Pocket Cinema Camera 4K.

iPhones are usually better for filming, but iPads have more screen space for editing. So you could film on your phone and AirDrop it to your iPad for editing (though not all iPads can handle 4K and ultra slow motion). 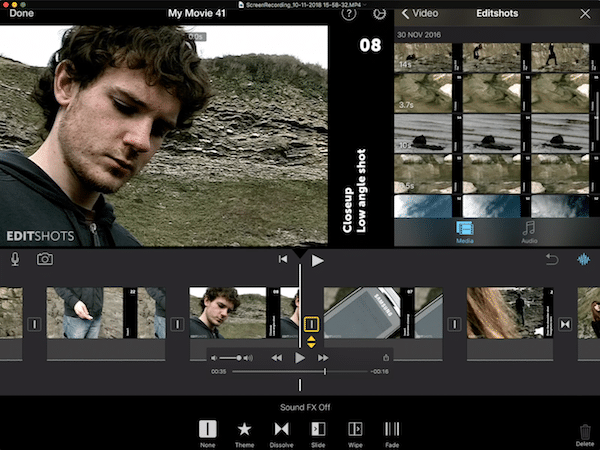 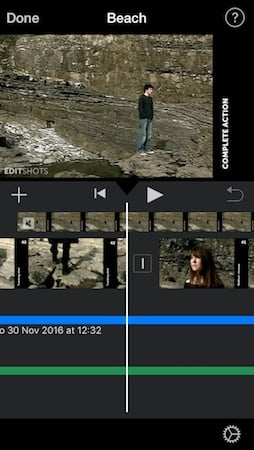 The iOS version of  iMovie is free with iPads and iPhones. It’s easy to use, but more limited than the desktop version. The most recent version has chromakey (green/blue screen) and a much wider choice of soundtracks. But I prefer VN Editor (below).

My major gripe is that it automatically adds dissolves between clips, which you have to remove. The iPad version (left) has a precision editor and audio waveforms which are missing from the iPhone version.

VN Editor is an impressive free editor that works on most recent iOS and Android devices (there’s also a Mac version). Unlike most free editors, you don’t need to pay extra to remove a watermark. You can even add beat markers to edit to the rhythm of music, and keyframes for adjusting effects.

I find the interface more intuitive than the mobile version of iMovie, and the Android version also works well. 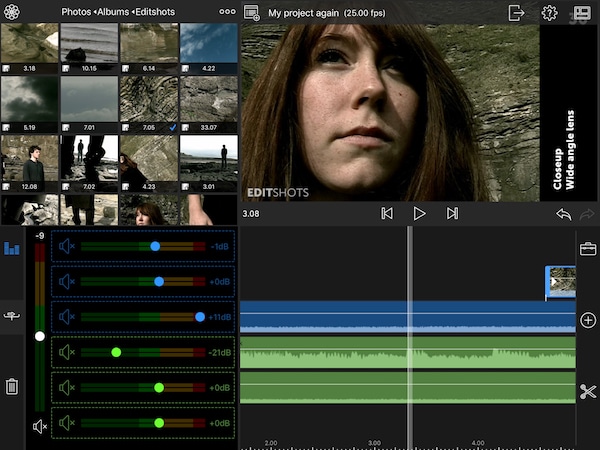 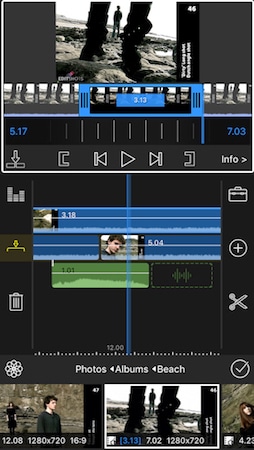 Lumafusion is the most professional editing app you can get for mobile devices.  Popular with mobile journalists, it supports multiple video and audio tracks and a range of frame rates and aspect ratios. It’s more powerful, but less user-friendly, than iMovie or Premiere Rush. It’s best on an iPad (left).

It’s a one-off $20/£20 purchase.  It’s a worthwhile upgrade from iMovie, and better value than Rush unless you already have a Creative Cloud subscription.

Even if you film on a phone, it’s easier to edit on a computer. Editing programs have more features, there’s more screen space, and it’s easy to add extra storage.

If you’re buying a computer for editing, desktop machines are better value than laptops if you don’t need to be portable. Check the system requirements of the editing program you’re planning to use: video editing (especially 4K) is demanding, takes up a lot of space, and needs a powerful computer.

I edit on Macs. They’re designed for video, they come with the useful iMovie editing program, and they’re widely used in the film and media industry. You get more for your money with a PC, but they aren’t as user-friendly.

Want to learn more about editing? EditClass is my editable short movie (90 clips of movement, action, dialogue and B-roll) which you can edit yourself in any standard editing program. It comes with a step-by-step PDF user guide, editing exercises, and guides to essential techniques for Adobe Premiere Pro, Final Cut Pro X, and iMovie (both Mac and iPad/iPhone versions. Learn more

You can get online classes: