Film lighting can be expensive and awkward to use, and it takes practice to get good results. I suggest you learn to get the best out of natural light first, maybe with simple reflectors and diffusers. If you need a full lighting kit it may be better to hire it. But it can be useful to own a basic portable light; maybe not to use as a main lighting source, but as a ‘fill’.

Traditionally films used three-point lighting, but you may not need three lights. Many documentary makers just use one main light. They may use a reflector for fill, and sometimes an additional light for the background or as a rim light to illuminate the edge of the subject. 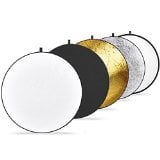 To enhance natural light, get an inexpensive folding 5 in 1 reflector, which includes a diffuser (to reduce and soften light); gold, white and silver reflectors (to ‘fill’ or lighten shadows); and a black side to use as a ‘flag’ (to block out light and make shadows deeper).  I have two – a small and large one.

Most filmmakers are switching to LEDs which are cooler, safer and can run off batteries. If you want tungsten, I’d suggest looking for used sets in good condition rather than buying new.

LED lights are safer than tungsten as they don’t get nearly as hot, though you shouldn’t look at them without a diffuser fitted (bare LEDs can cause eye damage). They’re light and portable, and most can run off mains or batteries. Many use relatively affordable Sony NPF-pattern batteries.

You need to match the light to the overall light in the scene, so you can buy daylight or tungsten balanced LEDs. You can also get bi-colour lights with variable colour temperature. (You’ll get more for your money by buying daylight panels and adding coloured diffusers/gels when you need to match tungsten lights.)

If you’re making a black and white film, you don’t need to worry about lighting colour so you can use cheap LED worklamps.

Bigger panels give softer lights. To get natural skin tones, you need lights with a CRI of 95 or better. 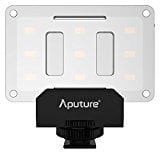 The tiny Aputure AL-M9 fits in your pocket and comes with a diffuser, a couple of gels and a detachable cold shoe mount. Power output is controllable in steps, and colour rendition is good. I own one: it’s affordable and surprisingly powerful for its size. You could use it as an emergency key light in very low light situations, to highlight things or fill awkward shadows, or as an eye light.

COB (chip on board) lights

An LED spotlight fitted with a softbox will give more powerful, softer light than a LED panel for the same budget. But they’re heavy. They also get hot, so most are fitted with cooling fans which can be noisy. Most COB lights have a ‘Bowens’ mount for fitting standard lighting modifiers. Some can run off (expensive) V-mount batteries but others are mains-only.

The Godox SL 150 II is powerful, with a fairly quiet fan which only comes on at higher power outputs. It’s mains-only.

The Godox SL60 (also mains-only) is much cheaper, but the fan is noisier.

The more expensive Aputure LightStorm C120D II can run off mains or batteries and has better colour rendition than the Godox lights.

If you’re working with a friend you could get them to hold LED lights for you. Otherwise you’ll definitely need a lighting stand. Get one that’s strong enough – some of the cheaper ones aren’t stable and don’t last long. The Lumo Pro LP605 is compact and lightweight. You can use sandbags to weight the legs of lighter stands.

For heavier lights like the Godox above, you need professional C-stands, which you can weight with sandbags.

You can use inexpensive clamp lamps, builders’ work lights or high powered torches instead of pro lights. Roberto Rodriguez used these for his low-budget debut El Mariachi. If you’re using tungsten bulbs rather than CFLs, be careful as they’ll get hot and can shatter dangerously. Never move hot tungsten lights: wait for them to cool down first.

Alternatively, put high powered LED bulbs into standard light fittings or Chinese balls. For good colour rendition you need LEDs with a CRI of 95 or more (though you don’t need to worry about this if you’re making a black and white film).