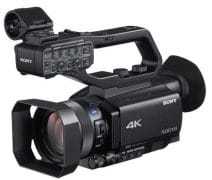 Which video camera should you buy? It depends on your budget and the kind of film you’ll be making.
My choice of the best cameras for video in 2022

You can choose between four main types of camera for serious low-budget filmmaking: mirrorless/DSLR, prosumer camcorders, pro camcorders and cinema cameras. Each type has its pros and cons: there’s more about the differences between them here.

Click on the headings for more details, and recommended cameras, in each category.

Cost: from around $500
Interchangeable lens cameras are mainly designed for serious still photography. But they’re the most affordable way to get into creative low-budget filmmaking.

They have big sensors and lenses compared to camcorders. So they’re better for low light and ‘cinematic’ shallow focus shots. Downsides? You may need accessories to get the best out of them, they’re slower to use than dedicated video cameras, and audio recording can be tricky. But recent mirrorless cameras like the Panasonic GH5 and the G85/G80 have image stabilisation and electronic viewfinders to make video shooting easier. 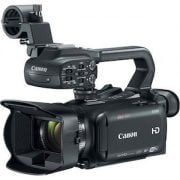 Cost: from around $1300
Large-body camcorders such as the Canon XA11 have built-in zoom lenses and headphone sockets. They’re faster and easier to use than DSLRs and mirrorless cameras, so they’re good for news and events. But most have fairly small sensors. That means they aren’t as good as mirrorless cameras in low light, and you can’t get as creative with shallow focus.

Some prosumer cameras like the Sony AX700 have larger one-inch sensors, so they’re better in low light and for shallow focus shots.

Cost: from around $1400
Cameras like the Sony PXW-Z90 have good manual controls, and professional audio inputs and outputs. They can record in pro video formats which are easier to adjust and correct than most video filmed with DSLRs and camcorders. They’re a good choice for news, events and corporate video. 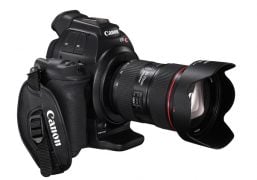 Cost: from around $1400 body only
High-quality cinema cameras take interchangeable lenses. Their large sensors let you get creative shallow focus effects, like DSLR/mirrorless cameras. But because they’re designed for video, not stills, they’re easier to film with.  Most of them have better image quality, especially in low light. They can record in pro video formats that are easy to adjust and correct. Most of them can’t shoot stills.

Most of them are very expensive. If you don’t need 4K, you could get a used Canon C100.

The BlackMagic Pocket Cinema Camera 4K is the most affordable option for shooting high quality 4K RAW and ProRes files.

More about how to choose between DSLRs, mirrorless cameras and camcorders

These are the cameras to consider if you want something straightforward to use at work, in school, at home or for travel.

Cost: from around $180
Small camcorders are some of the most affordable and user-friendly options for shooting videos. They’re useful for beginners, schools and families, though image quality won’t be as good as SLRs or mirrorless cameras.

Avoid cheap (under $100) camcorders from makers you haven’t heard of.

Cost: from around $330
You can shoot and edit on iPads and iPhones. Smartphones are discreet and portable and some of them can shoot great video in the right conditions. They’re not just for families and schools: researchers, journalists and business are using them more and more.

Cost: from around $150
These little cameras are tough, but you wouldn’t want to use one as your main camera. You can mount them on bikes, helmets, cars, your body, or even animals. Most of them don’t have screens. The more expensive ones let you monitor the image with a wireless monitor or an iPhone or Android app. You could also consider the DJI Pocket (below).

This tiny combined camera and stabiliser is good for shooting action and events and for flowing, creative camera moves. It can shoot 4K at up to 60fps and Full HD at 240fps. It’s worth considering as an alternative to a basic camcorder, an action camera, or a phone/stabiliser combo.

How far does the camera zoom out (wide angle) and zoom in (telephoto)? The wide-angle setting is probably more important as it lets you get close and makes handholding easier. The best way to compare this is find out what the 35mm equivalent is: under 30mm is good, 25mm or less is great. It’s the optical zoom range you should ask about – digital zoom is irrelevant (see bottom).

How close can the camera focus? What’s the widest aperture? (A low number, like f/2 or f/1.7, lets more light in so you can use the camera in dark conditions or get shallow focus effects).

Image stabilisation can make pictures less shaky. It’s not essential if you’re going to use a tripod or a good camera support, but it’s very useful for shooting handheld. The most effective stabilisation, featured in some new cameras like the Panasonic GH5, combines lens-based optical stabilisation and sensor-based in body image stabilisation (IBIS).

Larger is better – up to a point. The bigger sensors in HDSLRs, mirrorless cameras and large sensor video cameras are are usually better in low light, and let you get shallow focus effects. They also let you use smaller apertures without diffraction softening your image. But for news and events shooters, the greater depth of field you get from a small-sensor camera can be useful.

Mirrorless cameras and DSLRs come in three main sensor sizes: full frame, APS-C and Micro Fourth Thirds (MFT). MFT sensors are the smallest, which means the cameras and lenses are compact and convenient, but less good in low light. APS-C is around the same size as 35mm movie film frames: nice for shallow focus and low light than MFT.

‘Full frame’ cameras give the best low light performance (and ultra-shallow focus, if you need it). But they’re expensive and have bigger, heavier lenses: I don’t really recommend them unless you’re sure you need them.

You only really need 1080p HD for most uses, but filming in 4K ‘ultra high definition’ has some advantages. 4K footage can look better even when downsized to 1080p, and it also gives you the option of cropping (eg from a mid shot to a closeup) when you edit.

Do you need to record broadcast quality footage? That usually means HD footage shot at a bit rate of at least 50Mb/s, with 4:2:2 chroma subsampling (that’s twice as much colour information as the 4:2:0 you get with many camcorders and SLRs). It also requires a minimum sensor size: 1 inch for a single chip, or 1/2 inch for three-chip cameras.

Digital zoom. ‘200x digital zoom’ sounds great, but it’s just a way of electronically blowing up the middle of the image. It makes the picture quality worse, so you shouldn’t use it. Only the optical zoom counts.

Megapixels. This tells you how many million light-capturing pixels there are in the sensor. More megapixels are supposed to be better for big prints, but they don’t make video any better. (Full HD video is only 2 megapixels and even Ultra HD 4K is only 8MP). More megapixels on a small sensor may mean that the camera is worse in low light.