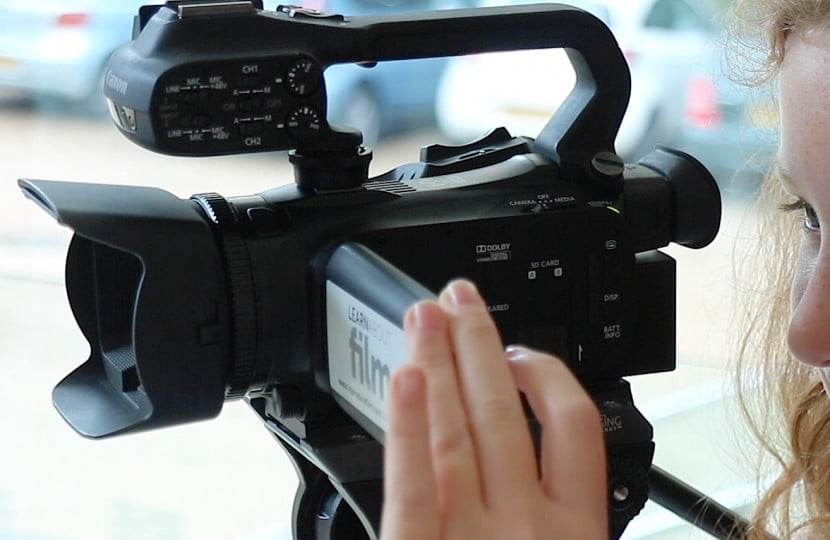 UPDATE: The XA20 has now been replaced by the XA11.
Physically the new camera looks identical but it has a ‘CMOS PRO’ sensor for better low light performance, and optional ‘Highlight Priority’ and ‘Wide DR’ modes for better results in difficult or contrasty light.

I bought a Canon XA20 to use on an education project. Why buy a camcorder like this with a fairly small sensor? Doesn’t everyone use mirrorless cameras nowadays?

Yes, a DSLR is an affordable way to get good image quality. But they’re not the best choice for everyone. It’s all about what kind of films you want to make.

DSLRs and mirrorless cameras are basically stills cameras. Video is an extra that’s been added on, so they have drawbacks. You’re going to need extra gear if you want to use them seriously for filming. If you have the time, and you can work around their limitations, you can get great results. But if you’re shooting news, events, and maybe documentaries, you should look at camcorders as well.

My verdict on the XA20? It’s great. After shooting with SLRs for a few years I’d forgotten how much easier it is to film with a ‘real’ camcorder.  And the XA20 is a very well designed camcorder.

If you’re serious about filmmaking (and don’t need 4K) it’s worth considering a used XA20 as an alternative to a consumer camcorder or entry-level mirrorless camera.

What’s professional about it?

The main pro feature is the top handle.  Take this off and it just looks like a large amateur camcorder. Specifically, it look just like its less expensive baby brother, the HF-G30. If you’re on a budget, you could get one of these instead. 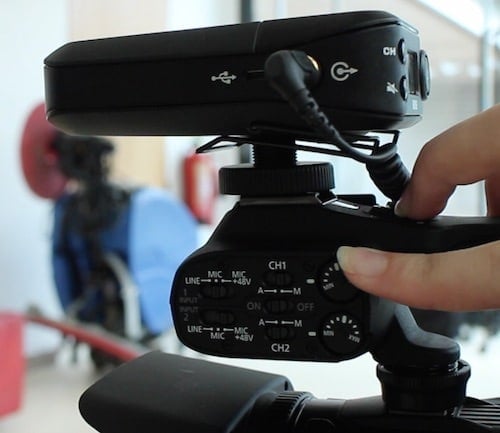 The XA20 has proper dials to control audio levels. Here it is with a Rodelink wireless mic.

This top handle has two XLR audio sockets so you can plug in professional microphones. It also has manual switches and dials for choosing audio inputs and levels (when the microphones are connected to the top handle) and a separate zoom rocker and record button (for low angle shots).

What’s NOT professional about it?

Pro filmmakers I was working with were impressed by how compact it is. And it has those XLR inputs and uncompressed pro audio. But it’s not a pro camcorder in the sense of being able to shoot stuff that big broadcasters like the BBC or PBS would accept. Yes, the footage is really crisp and sharp, with good colours, but it’s only ‘4:2:0’ like most DSLRs. ‘Real’, expensive pro camcorders shoot at least ‘4:2:2’. This makes for better colours that are easier to adjust and ‘grade’ afterwards. Broadcasters also want a minimum ‘bit rate’ of 50 Mb/s, while the XA20 tops out at 35 Mb/s. And the sensor is much smaller than a DSLR.

If you can afford it, the Sony PWX-70 has a similar form factor to the XA20 but with a bigger sensor – it can shoot real broadcast quality 4:2:2, and has an SDI output for connecting to pro TV equipment.

The other thing that’s not professional is the lack of dials and buttons on the main camera body. To get at most of the settings, you have to go through touch screen menus. Professionals don’t like this because it’s slower than using physical controls. However, the XA20 does have six buttons that you can program yourself, so you can access the main settings you use regularly. This video, by Ryan Jackson of the Edmonton Journal, shows how he sets up the camera and buttons to make the camera quicker to use. (The video is actually about the more expensive XA25, which is identical except that it has an SDI output.)

A couple of things surprised me about the camera. First is that it’s much better in low light than I expected (the new XA11 is significantly better). The second is just how good the image stabilisation is. It makes shooting without a tripod a viable option, which it certainly isn’t with telephoto lenses on an SLR.

It’s also great to have proper audio controls and easy headphone monitoring. I used it with the Rode VideoMic Pro and the Rodelink wireless system. Both of these are minijack rather than XLR systems, but the XLR handle was still useful. Connecting to the XLR sockets with a Rode VXLR adaptor allowed me to set the level with the dial rather than the onscreen menus.

The lens is really good. It’s got a long, 20x optical zoom range, going from a genuine wide-angle 26.8mm (29mm with image stabilisation turned on) to a long 576mm telephoto setting. Flare is well controlled (much better than on my older, ‘pro’ XF100) and there’s a neat flip-down lens hood.

And this camera is really easy to use. You can set focus, white balance and exposure manually, but the ‘full auto’ setting works well in most situations. I used it on a series of summer youth film projects, and kids as young as 12 got great footage with it.

The XA20 is small, neat and fast to use. It’s great for education projects because it’s relatively easy to use despite looking and feeling professional.