If you’re starting out with creative filmmaking, a mirrorless camera is the best value option. These cameras can shoot high quality 4K video and stills. You can swap lenses. And they have fairly large sensors. This makes them good in low light, and also makes it easier to film creative ‘shallow focus’ shots.

Here’s my selection of filmmaking cameras from $500 to around $2000. In addition to mirrorless cameras, it includes one cinema camera and a prosumer camcorder.

For the ultimate image quality in controlled conditions, you could get the BlackMagic camera.

For news, events, documentary and school use, the Canon XA11/XA40 camcorders could be more convenient.

What kind of camera do you need?

If you’re on a really tight budget, you could choose a used camera for under $300.

I’ve now added eBay links so you can search for pre-owned cameras. This article has useful tips on buying safely on eBay. 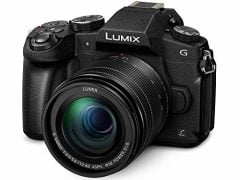 The Panasonic G85 (G80/81 in Europe) is the best-value camera you can buy for filmmaking, at around $700 with lens. I use one myself. It has a solidly built magnesium body with a tilt and swivel touchscreen, and the body and lens are weathersealed. The sharp 12-60 kit lens covers a useful zoom range, from wide to telephoto. The camera can shoot 4K, and HD at up to 60p slow motion. And it has very good image stabilisation, which makes for easy handheld shooting.

Cons? The sensor size is Micro Four Thirds, which is smaller than the Fujifilm and Canon cameras below. So it’s not as good in low light, though it’s better than older Panasonics. It doesn’t have a headphone socket, though you can rig up an audio output from the HDMI socket. Battery life is OK but not great (you can add a battery grip to double it, or use an adapter and an external battery).  Autofocus is a bit slow, especially when shooting 4K. But its solid build, slow motion and image stabilisation make it a great choice.
More about the G85

Fujifilm’s X-T3 (around $1050 body only) has a larger APS-C sensor, so it’s better than the Panasonics for low light and creative shallow focus. It has great color rendition, good dynamic range, and pro video features at a relatively affordable price.

Its impressive features include very good low light performance, ultra-fast autofocus, and 4K slow motion. It can record high-quality 10bit files at 400Mb/s, and shoot in log mode. (Log mode compresses the highlights and shadows, so the camera can capture a greater range of contrast and the image stands up better to colour correction and grading.)

It doesn’t have in-body image stabilisation, and the screen tilts rather than swivelling fully. Battery life isn’t great, but you can power it over USB-C using an external power pack. 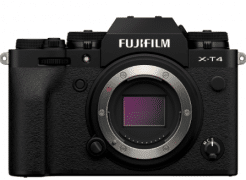 The newer X-T4 costs more: it’s around $1700 body only. That gets you excellent 5-axis image stabilisation, a fully swivelling screen, a bigger battery, better autofocus and 10x slow motion in HD. You also gain ‘F-log assist’, which allows you to preview what the finished image will look like when you’re shooting in log mode. They’ve removed the headphone socket, but the camera comes with a USB-C to headphone adapter.

Canon’s M-series cameras and lenses are very compact but have fairly large APS-C sensors, excellent colors and very good dual pixel autofocus. You can fit standard Canon EF lenses with an adapter. The EOS M50 II(around $700 with kit lens) has an easy-to-use interface. Its portability makes it a good option for vloggers and journalists. New features on the Mk II version are vertical video, wireless streaming and compatibility with Canon’s Webcam Utility.

It’s really designed for shooting HD: when it shoots 4K the dual pixel AF doesn’t work and the image is heavily cropped. It doesn’t have in-body image stabilisation, and there’s no headphone socket.

If you don’t need the new features you could save money by getting a used M50 rather than the newer model.

The Panasonic GH5 II mirrorless camera (around $1500 body only) has a lot of video features in a relatively small package. It has excellent in-body image stabilisation, good battery life for a mirrorless camera, and it can record a range of broadcast-quality 4K and HD formats. It includes ‘V-log’ recording (which was a paid upgrade on the original version). It’s solidly built and robust, and you can add a pro audio module. Cons? The MFT sensor is relatively small, so low light performance isn’t as good as some competitors. More about the GH5 II

The GH5S (around $1400 body only) is designed specifically for filmmaking, with more pro video features, better video quality and much better low light performance. It’s probably the best moviemaking camera under $2000. But it doesn’t have in-body stabilisation, and still images are limited to 10MP.  More about the GH5S 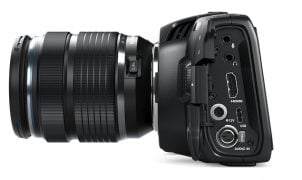 The BlackMagic Design Pocket Cinema Camera 4K has plenty of pro features and excellent image quality at an affordable price. It costs around $1300 body only. It can shoot RAW and ProRes files at up to 60fps and has pro audio inputs. Like the Panasonic cameras it has a Micro Four Thirds sensor.

The downside are that its RAW and ProRes files are very large, it doesn’t have in-body stabilisation or an eye-level viewfinder, and battery life is poor. It’s very good value for creative filmmakers looking for very high image quality in controlled conditions, but I wouldn’t recommend it for beginners.

More about the Pocket Cinema Camera

It’s recently been updated and the new version has improved video features: Full HD at up to 240fps, and a 30 minute record limit (the older version could only shoot 4K for 10 minutes).

Unusually for a camera at this price, it can shoot in log mode and in 17:9 DCI (digital cinema widescreen) aspect ratio. It can also record high quality 10-bit 4:2:2 to an external recorder. There’s also the option of shooting cropped Full HD video at up to 120fps slow motion.

There’s no headphone socket, but you can connect headphones via the USB-C adapter. It has focus peaking, zebras, and Film Simulation modes which emulate the look of traditional Fuji film stocks. But there’s no in-body image stabilisation or weathersealing, and the screen tilts rather than swivelling fully.

A prosumer camcorder, with a built-in zoom lens, can be more convenient than a mirrorless camera. Buttons and dials give direct access to important controls. They’re quicker and easier to use for news, events, corporate videos and school use.

The Canon XA11 and XA40 cameras have a detachable top handle which makes it easier to film low angle shots and allows you to connect professional XLR microphones. They’re compact and well designed (though the eye level viewfinder is small). They have a long zoom range: 26.8-576mm on the XA11, 29.3-601mm on the XA40.

The XA40 can shoot 4K, and 1080p with a slow motion option. It has a slightly larger sensor and better low light performance than the XA11.
Check price/buy Amazon 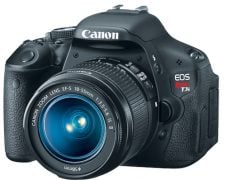 If you’re on a tight budget, used older models of Canon’s video SLRs such as this T4i, or the more expensive 70D, are the best choice. Unlike the other cameras here, they aren’t mirrorless and can’t shoot 4K. But they have good colors, relatively large APS-C sensors, and a good range of affordable lenses. They are also very good for still photography. Search on eBay

Alternatively, you could opt for one of the mirrorless EOS-M series, or a camcorder. Other options under $300 on this page.

With a camcorder, how far does the camera zoom out (wide angle) and zoom in (telephoto)? The wide-angle setting is probably more important. It lets you get close and makes handholding easier. The best way to compare this is find out the 35mm equivalent. Under 30mm is good, 25mm or less is great. It’s the optical zoom range you need to know – digital zoom is pretty much irrelevant (see bottom).

How close can the camera or lens focus? What’s the widest aperture? (A low number, like f/2 or f/1.7, lets more light in so you can use the camera in dark conditions or get shallow focus effects).

Image stabilisation can make pictures less shaky. It’s not essential if you’re going to use a tripod or a good camera support, but it’s very useful for shooting handheld. The most effective stabilisation, featured in some cameras like the Panasonic GH5, combines lens-based optical stabilisation (OIS) and sensor-based in body image stabilisation (IBIS).

Larger is better, up to a point. The bigger sensors in mirrorless cameras and large sensor video cameras are usually better in low light. They also let you get shallow focus effects. But for news and events shooters, the greater depth of field you get from a small-sensor camera can be useful.

You may only need 1080p HD, but filming in 4K ‘ultra high definition’ has some advantages. 4K footage can look better even when downsized to 1080p, and it also gives you the option of cropping (eg from a mid shot to a closeup) when you edit.

If you’re planning to film material for broadcast, check the format requirements with the broadcaster.

Digital zoom. ‘200x digital zoom’ sounds great, but on most cameras it’s just a way of electronically blowing up the middle of the image. It makes the picture quality worse, so you shouldn’t use it. But the ‘digital teleconverter’ setting on some mirrorless cameras is useful as it can enlarge the image without losing quality.

Megapixels. This tells you how many million light-capturing pixels there are in the sensor. More megapixels are good for big prints, but they don’t make video any better. (Full HD video is only 2 megapixels and even Ultra HD 4K is only 8MP). More megapixels on a small sensor may mean that the camera is worse in low light.