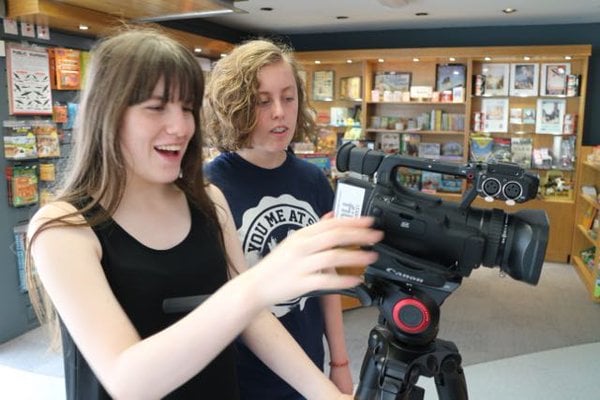 You need a camera or a good smartphone, and a program or app to edit what you’ve filmed. You can shoot and edit on a smartphone or tablet (iPhones/iPads are easiest, Android devices are cheaper). But for serious video making, it’s best to edit on computer.

There are three stages to making a video: planning, shooting, and editing and sharing.

Planning makes all the difference. Write down what your video is for.

Example of things you can include in a factual video

Find out as much as you can about the subject. Then choose the most important things you need to include.

Write a script. Basing your film on a voiceover script is a good way of structuring it. And it’s easier than recording live sound. Fifty words is about right for a thirty second video. Keep the sentences short and practise reading them out. Rewrite the script to get rid of any tongue-twisters.

Plan your shots with a storyboard. That’s a series of drawings or photos, one for each shot in the film. You’ll need about one picture every two or three seconds. So a thirty-second film will need ten or fifteen clips. Each shot should be different: it should either show a different thing, or a different view (e.g. a different shot size or camera position). Try to choose pictures that will help people really understand the story. If you really don’t like drawing, take photos or write a list of shots instead.

Get the shots you need

Free templates to help you plan

Use different shots, such as long shots, mid shots and closeups.  You need plenty of close-up shots to show details. Guide to shot sizes

For each shot, think where to put the camera. Don’t just film at eye level, or from straight in front. More about camera position

Use a tripod if you can. If you can’t, zoom your camera all the way out to avoid camera shake (then move closer to the subject).

Check your camera is working OK. This is especially important if you’re recording live sound. Film a test shot and play it back, listening to the sound.

Frame the shot carefully. Check the background. Use plenty of closeups that show just the thing you want people to concentrate on.

Watch the light. Try to shoot away from the light, unless you’ve got a high-quality camera that lets you adjust the exposure manually. Make sure there’s enough light, especially if you’re using a phone or basic camcorder.

Shoot enough. When you’re ready to film a shot, press the record button and film about ten seconds. If there’s action in the shot, start filming a few seconds before the action, and carry on filming for a few seconds after it ends. Then press the button again to stop filming.

If you think you’ve got a shot wrong, film it again.

Make sure you’ve shot everything you need. Tick off each shot on your storyboard or shot list as you film it. Look for other interesting shots or details as well – you don’t just have to film what’s on the storyboard.

Look through your shots first before you start editing. You could use the logging sheets and documentary templates on this page to help you choose and plan your clips.

On a computer, launch the editing program, put the camera into Play mode, and import the video. (iPhone/iPad advice here.)

Keep checking your video as you edit it. Don’t just play one clip back: go back a bit and play several clips together so you can see if the shots go together well. Make sure that none of the shots are too long or too short.

When you’re satisfied with your finished video, export it. Don’t just leave it as a movie project – if any of the source clips get deleted it won’t play properly.

More about editing your video