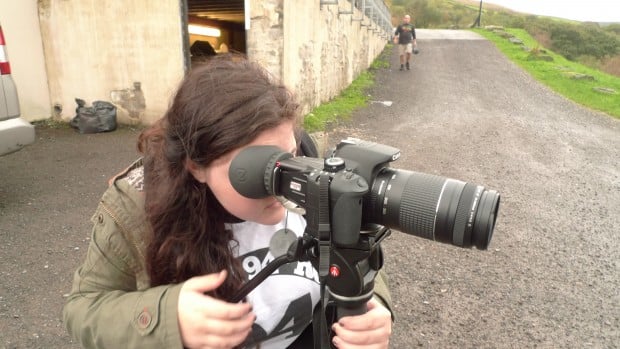 If you’re a good photographer you’ve already got many of the skills you need to make films. You know about composition, light, lenses and focus. But there’s a lot more to filmmaking than the image.

Making a film takes planning. It’s much easier if you follow an organised filmmaking process.

A shot in a film isn’t the same as a photograph. It’s part of a sequence. One beautifully composed shot can make a great still image, but with a film you should always be thinking about what comes before and after it. The example film on this page shows how shots build up to tell a story.

Coverage means getting the shots you need to tell the story, and making sure that they will edit together.

Complex pictures work well in a gallery or on the page. But in a film, they’ll only be on screen for a few seconds. Just show one (or maybe two) things in each shot, and put them together to build your story. Shots that seem plain or boring on their own can build together to make really strong sequences.

When you shoot action or dialogue scenes, you need to follow a set of ‘rules’ about where to put your camera, how to arrange things in the shot, and how you edit. These continuity principles will help ensure that that your scene makes sense to the viewer.

You need to keep the light and white balance consistent, otherwise your shots may look as if they were filmed in different places. Always set and lock the white balance: if you use auto white balance, it can change during a recording.

As a photographer, you’ll already be looking for things like pattern, texture and colour. With video, you need movement as well, or your shots will just look like stills. If there’s absolutely no movement in the image, try moving the camera itself: slowly tracking in, out or sideways.

When I first switched from stills to video I’d just shoot a couple of seconds of each image. But those short clips were impossible to edit. You need to keep filming for at least ten seconds.

If there’s action or speech, start filming a full five seconds before the action, and keep the camera running for at least five seconds afterwards.

You may have a steady hand, but nobody can hold an SLR completely still for ten seconds. Use a tripod, monopod or stabiliser. If you can’t avoid handholding, use a wide-angle lens: camera shake will be less obvious.

…or use smooth camera movements

Smooth camera movements can add life and depth to your film. But movements should always be slow, steady, and go in one direction only.

It doesn’t matter how great your shots are: if the sound is poor, it’ll turn your viewers off straight away. Your built-in microphone almost certainly isn’t good enough: you either need a separate mic or audio recorder, or you need to create the soundtrack separately. Here’s an introduction to film sound, some tips on how to get it right, and a list of sound equipment.

There are a few technical issues you need to know about when you shoot video with a still camera.

For movement to look smooth and ‘film-like’, your shutter speed should be half the frame rate – so if you’re shooting at 25fps, your shutter speed will be 1/50. To adjust exposure without changing the aperture, you can vary the ISO (which can introduce noise) or use filters. Variable ND filters can help, but good ones are expensive and may give strange results with wide angle lenses.

Shooting HD video, or even 4K, with a sensor designed for much higher resolution stills can cause problems. Some manufacturers do this by line-skipping: they only record video from some rows of pixels on the sensor. This can cause distracting moiré patterns if your subject has a lot of detail, particularly with grids, meshes, lines and rows of bricks or tiles.

When you move your camera sideways, or record horizontal motion, you can sometimes get distorted images. This happens when the camera doesn’t record all the image at the same time, instead scanning down or across the sensor. Most SLRs and mirrorless cameras suffer from this to some extent, though some are a lot worse than others.

What do you need?