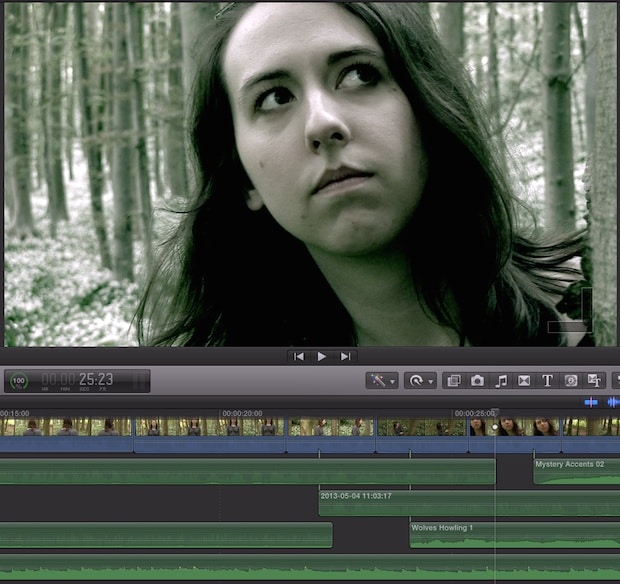 Sound is a really powerful tool for storytelling and giving your film impact. You should plan the soundtrack in detail – don’t just add any old music as an afterthought.

Soundtracks can include lots of different elements and you’d normally build them up in layers, with different kinds of sound on different tracks.

Your film can include sounds that seem like a natural part of the scene: waves breaking on a beach, wind blowing, and dialogue (people on screen talking). These are sometimes called diegetic sounds. Though they seem real, they don’t have to be recorded live: sound effects are often better than the real thing.

Imagine you’re filming a scene in the woods with a girl walking. Your on-camera microphone will probably just pick up a confusing mush of sound. You may not be able to hear the footsteps. Ditch the soundtrack, and use separate sound effects for birdsong, wind and the footsteps, and your scene will be much more convincing. By doing this, you’re using the sounds as if they were closeups, to focus attention on important things.

If you don’t want to use artificial sound effects, get in close so you can pick up individual sounds. In your editing program you can detach the audio from the video and move the sounds to where you want them. Or, even better, you can record the sounds using a separate audio recorder.

You can use diegetic sound that matches things you see on screen, like the footsteps with the walking feet. This is called synchronous sound. Now imagine that the camera stays on the girl, but we hear a branch snapping. Suddenly there is tension and mystery. This kind of sound, which comes from something that’s not on the screen, is called asynchronous sound.

Most films also use sound that we know has been added: things like voiceovers, and background music. This is called non-diegetic sound.

You can use music to set the scene and show where and when the film is set. So a scene of an old house becomes France if you play accordion music, or the 18th century if you hear baroque music.

You can also use it to establish the mood, or change it. Deep, sinister tones tell us that something scary is about to happen, or that a character who seems friendly is actually dangerous. High violin notes suggest tension, and discordant sounds make us feel uncomfortable. Fast music can add excitement to an action scene.

Hits are where the music exactly matches an action we see on the screen, though if you use them too much it looks cheesy: it’s called ‘Mickey Mousing’ because it’s most common in cartoons.

You can also use music that goes against what you see on screen. To create a sense of irony, use happy music for a sad or scary scene. This is sometimes called contrapuntal music (as opposed to parallel music, which matches what happens on screen.)

In a longer film, you could even give each character their own musical theme or leitmotif.

Sound and editing can work together. Changing the sound and the image at different times (split edits) can make a sequence flow more smoothly, because it makes the cuts less obvious. Or you can link two scenes using a sound bridge. So at the end of a scene in an office we might hear birdsong, before we cut to the next scene which is in the woods. This helps prepare us for the change of scene.

You can also edit your whole film or sequence to music, with the images changing on every bar, every beat, or when there is a change in the mood of the music.

Don’t forget the power of silence. A sudden change from hectic music to silence can be shocking, and a few seconds of silence in a dialogue scene can build up anticipation and tension. You don’t usually want complete silence: the basic background ‘ambience’ of the location should usually carry on.

Sound inspirations
How great filmmakers have used sound to tell their stories.

Film sound basics
Essential tips for getting the sound right.