Josh Soskin’s Milk Run is a really neat short drama. It’s a great example of how a skilled filmmaker can tell a complex story in a few minutes. Watch the film first before you read on.

How the film works

You don’t have to base your film on a story, but if you do it needs to be strong.  You can try revisiting an old story or giving it a new twist. Milk Run might seem to be a modern film about a trip to the shops, but it’s based on an idea that’s thousands of years old: the ‘quest’, where a hero goes on a journey and has to overcome challenges to reach his goal. Instead of a magic amulet, Benjamin has the mysterious object in the case; the treasure is a pint of milk; instead of dragons and riddles he faces more modern challenges.

The story starts and ends with a mystery: we never do find out what’s in the case. Short films, like short stories, don’t need to wrap up all the loose ends, but this film is satisfying because the journey format comes to a conclusion.

Like most films Milk Run compresses time: it misses out the boring bits (we don’t see Benjamin leave his apartment or walk to the store) and concentrates on just the key action that’s needed to tell the story (most shots are a couple of seconds or less).

Lead character Benjamin himself never speaks, but we learn a lot about him from how other people treat him. His character and situation is established right at the start through his appearance and clothing, his mother’s criticism of him, and his downcast reaction.

All the characters are very clearly defined by their appearance, what they wear, their ways of speaking and how they move. Longer films can have more complex characters, but in a short film stereotypes help the viewer to grasp the story quickly.

The film uses a lot of different shots to spell out the story. (Try guessing how many, then scroll down the page for the answer).

The first shot is a closeup insert of Benjamin’s hands unlocking the case: we don’t realise what it is until we see the mid shot of him looking into the open case.

There are a lot of other inserts – picking up the keys, the barcode scanner, the gun falling in the waste bin, the hand shutting off the radio – which help to spell out the story.

The film uses shot reverse shot – shooting first in one direction then in the other direction – so we can see the characters full-on, for example when Benjamin meets the woman in the store. As the passion rises we go from mid shots to close-ups, and the camera also tracks (or pulls) in, moving to a side-on two shot to show the kiss.

The shots are carefully composed: usually the framing is off-centre, which seems more natural, but the encounter in the shop is centred and symmetrical which gives it a hyper-real quality.

The camera ‘tracks’ in several other scenes as well, moving sideways to follow Benjamin walking along the street. It tilts downwards to show him reaching for the object in his pocket. And for the dance scene it moves in a circular direction (an arc shot) around him.

On his outward journey Benjamin moves from left to right. This feels ‘natural’ for a main character, because Western audiences read from left to right. It’s also normal for people who challenge or confront him to come from the right hand side of the screen. But on the return journey he moves right to left.

The sound design is complex. In the first fifteen seconds or so there are several different kinds of sound. We see and hear the combination lock being opened; there’s sad piano music as the camera tracks towards Benjamin (we can hear this, but Benjamin can’t); we hear, but don’t see, a door opening off-screen; and we hear Benjamin’s mother’s voice before we see her. (The technical terms for these different kinds of sound are at the bottom of the page).

There’s some subtle technical trickery in this film. I suspect that the freeze frame effects were done using ‘chromakey’ – shooting against a blue or green screen and then replacing that with another image. So in the part with the mugger, Benjamin’s shoulder would be shot against a green screen and the green would be replaced with the still image of the mugger. For the parts where he walks past frozen people in the street, there would have been several different layers (with each object on a different one) and then motion would have been applied to each layer separately.

There are 55 shots. Here they are. 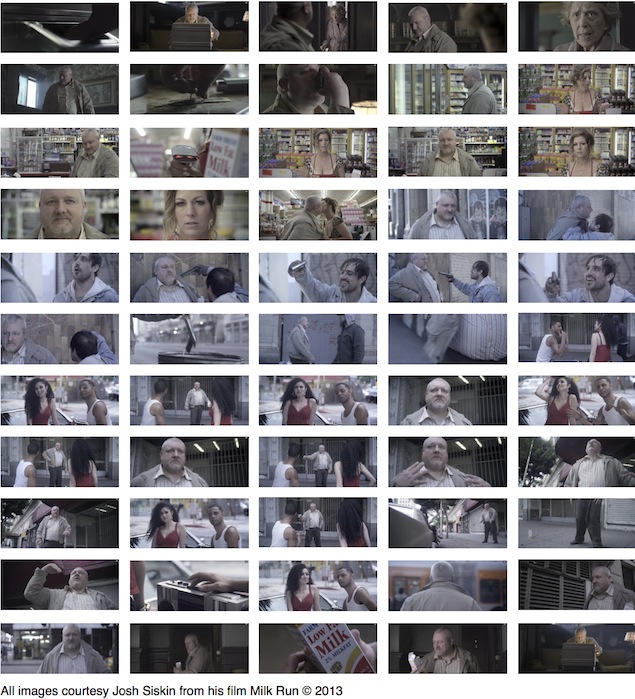 Wordwatch
Here are some useful words for describing and distinguishing between the different kinds of sound in a film.

Synchronous sound is where the sound shows something we see on screen – eg the sound of the tumblers turning on the combination lock in the first shot.
Asynchronous sound is the sound of something off-screen – eg the door opening off-screen while the camera is still showing Benjamin. Using asynchronous sound can help to build tension or anticipation, and let you tell your story using fewer shots.
Diegetic sound means sound that a character in the film would be able to hear, like doors opening and dialogue.
Non-diegetic sound is sound that characters wouldn’t be able to hear – stuff like atmospheric music and voicoever, which helps us to feel or understand the story but isn’t part of the ‘story world’ shown on the screen. (Music can be diegetic or non-diegetic. The piped music in the shop, and the music from the Latino couple’s boombox, are both diegetic because Benjamin would have been able to hear them).
Split edits are where the sound and picture change at different times. This usually makes the editing ‘flow’ better and seem less obvious. Split edits are also sometimes called sound bridges (though that really means a special kind of split edit that links two different scenes), J-cuts or L-cuts.

Thanks to Josh Soskin for permission to use Milk Run.