How does it compare with the EOS-M, the first mirrorless Canon? That sounded great on paper: all the advantages of a Canon APS-C DSLR in a small, solidly built metal body. But it was overpriced, with slow autofocus (later improved by firmware) and a complicated touchscreen control system. It was discontinued after poor reviews. There was a second M2 version, but it was only ever sold in Asia.

EOS-M (left) and M3 compared. The new camera is slightly thicker and has a much better handgrip, with physical dials for mode and exposure compensation. The knurled ring around the shutter button can be set to adjust shutter speed, aperture or ISO.

I bought the original EOS-M at a bargain price when Canon discontinued it. Despite its shortcomings I’ve used it regularly for both video and stills. Video quality is a lot better than iPhones and small-sensor compacts, but it’s small enough to go everywhere in my bag. It’s particularly good in situations where you don’t want to be poking a big camera in people’s faces. (The beginning ‘making of’ section of this youth film was almost all shot on an EOS-M with the stabilised 18-55 kit lens. )

With the M3, Canon have addressed almost everything that users found frustrating about the old camera. Handling is much better, with a chunky handgrip (which allows space for a bigger battery). There are more physical controls: it’s much faster to use as you don’t have to rely on the touchscreen as much. 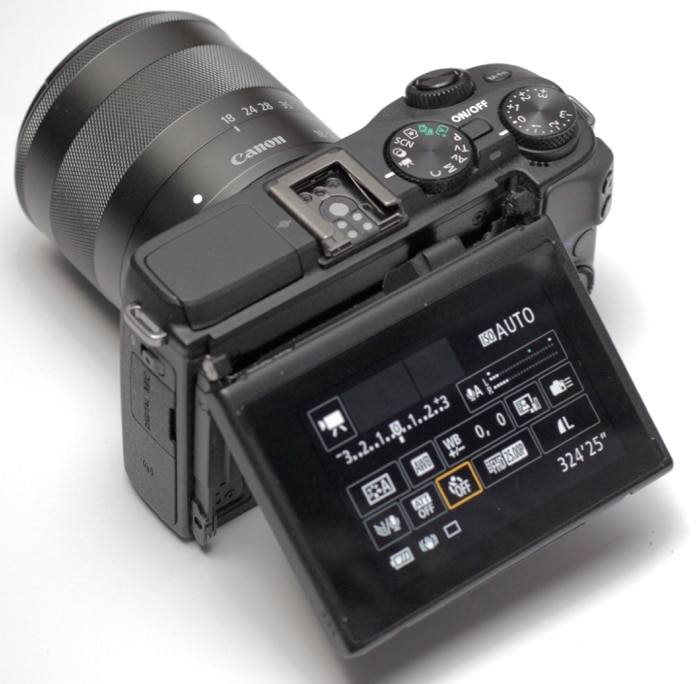 The screen tilts up and down, making low and high angle shots much easier. It will also tilt forwards for vlogs and selfies.

The controls on the rear. The movie shooting button is at the top, above the playback button. The metal control dial is positive and easy to use.

In fully manual mode, you can use the dials instead of the touchscreen to set aperture and shutter speed (or ISO). This makes for much faster adjustments.

Screen display options include a histogram (exposure diagram), and focus peaking to highlight which parts of the image are sharp. I still didn’t find the touchscreen that intuitive, though. 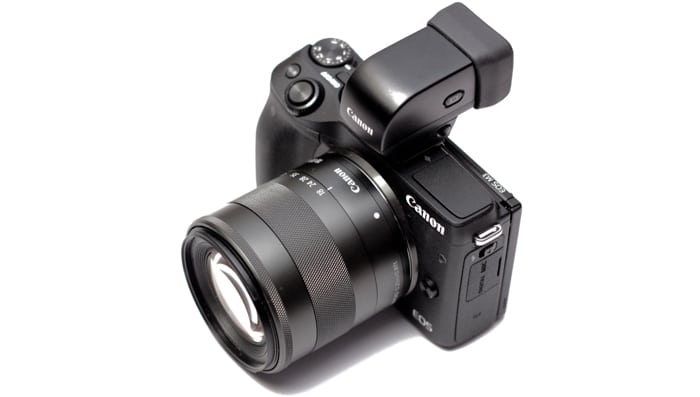 The optional EVF-DC1 electronic viewfinder mounts on the hotshoe, and can tilt up 90 degrees for low angle shots. It’s sharp and clear. Buying it bundled with the camera works out a lot cheaper than getting it later.

The M3 is a ‘world camera’, with a choice of PAL and NTSC frame rates. It’ll do 60fps slow motion, but only in 720p mode. Unlike some of its competitors, there’s no 4K option. But I don’t need 4K and you probably don’t either.

Lenses for the EOS M3

The original lens range was limited to an 18-55 stabilised kit zoom, and an (excellent) 22mm f/2 pancake. (It’s always been possible to fit full-size Canon lenses by using an EF to EF-M adaptor, but that rather defeats the point.) Canon have now added an 11-22 ultrawide and a 55-250 telephoto zoom, both stabilised.

There are also some appealing manual focus prime lenses from Ssamyang/Rokinon, including an 8mm f/2.8 fisheye, a 50mm f/1.2, and even a 300mm f/6.3 mirror lens.

I own the 22mm lens, but I mainly use the 18-55. It’s a good carry-anywhere lens: not as sharp as the 22mm for stills, but plenty good enough for video. The image stabilisation helps with handholding, though it’s not really good enough for walking shots.

The autofocus is much improved and works well in most situations. It’s even snappy enough to ‘pull focus’ during a shot,  as in the test video below. You can also use fly-by-wire manual focus, though there’s no hard infinity stop. (This might cause problems for filming distant, low-contrast objects such as clouds, though I didn’t get a chance to test it.)

If you like Canon’s SLR video, you’ll be happy with the M3: it has the same 24 MP sensor as the EOS 750D and 760D /T6i and T6s SLRs. Canon video isn’t as sharp as some of its competitors, but the colours are better. The M3 video was OK even in fairly low light, but suffered from moiré when filming detailed patterns. Auto white balance works well.

Here are some examples of the M3’s video quality, with Vimeo compression. (The first couple of shots have some centre softness on the clock. I think I may have set the autofocus away from the centre of the image, as I haven’t had problems with the 18-55 before.)

The EOS M3 was Canon’s third try at making a mirrorless camera, and this time they got it right. It’s solidly built, it has Canon’s renowned colour rendition, and an APS-C sensor for pleasing shallow focus shots. Despite costing less than its predecessor did at launch, it’s a much better camera. I really enjoyed shooting with it.

You could also consider the more expensive EOS M5, which has a built-in electronic viewfinder and in-body image stabilisation.

If you’re buying a used EOS M3, try to find one that comes with the electronic viewfinder included.