The DJI Osmo Mobile stabiliser let me shoot this crane/fake drone shot on my iPhone 6S without setting up a cumbersome jib. Instead, I mounted the Osmo on the end of an audio boom pole, and used Active Track in the DJI Go app to lock onto the sculpture in the middle of the shot.

You could do the same thing with the cheaper Zhiyun Smooth-Q stabiliser: unlike the Osmo Mobile, its app allows remote control of the gimbal, though its tracking isn’t as good as DJI’s. 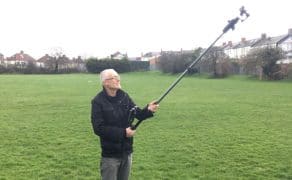 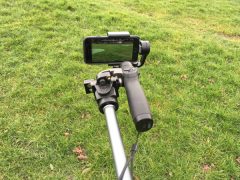 Here’s a development of the idea, shooting with Filmic Pro,  and controlling and monitoring it with Filmic Remote on another iOS device. This doesn’t give you Active Track, but it’s a lot less heavy on the phone battery than the DJI Go app. With a bit of practice you’ll be able to shoot fake aerial shots in places where you wouldn’t be allowed to use a drone.

I combined the iPow iPad mount with a pipe clamp mount (this Grifiti Nootle is the most common). The combination works OK but it’s not robust enough for heavy use.

I’ve now bought a Manbily A-222 reversible monopod to replace the boom pole: it’s lighter, folds up smaller and is very affordable.