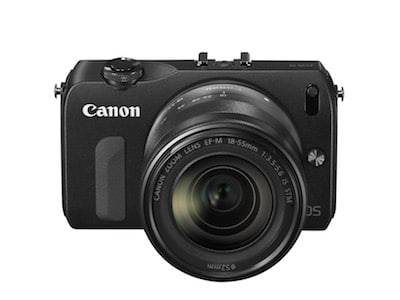 The EOS-M was Canon’s first crack at making a mirrorless camera – an interchangeable lens camera (like an SLR) without a mirror. Camera review blogger Ken Rockwell described it as “the world’s first serious mirrorless camera” when it was introduced in 2012 because of its image quality. But it was widely criticised as being overpriced and having very slow autofocus, which is why Canon discontinued it.

Autofocus is pretty irrelevant for serious filmmaking, and the original EOS-M can now be brought very cheaply. You should be able to find one for around £150 or less. This makes a good option if you want a compact camera with DLSR image quality. You can get Magic Lantern firmware to extend its video capabilities (including a 3x HD crop mode, which will triple the effective focal length of any lens you attach to it.)

The build quality is solid. The EOS-M appears to have exactly the same sensor as the Canon 60D DSLR, but it’s a fraction of the size and weight. Much easier to carry anywhere, and useful to get a second camera angle. It’s really useful as an unobtrusive but high-quality camera, so I can record people working without poking a big SLR in their faces. The stabilised 18-55 zoom is good and the 22mm f2 lens is excellent. The touchscreen-based controls are slow to use though, so it’s good to see that more recent models like the M3  (see below) have more physical controls on the camera body.

Update: There are several current cameras in the EOS M system.

The EOS M6 has a similar specification to the M5 but without the viewfinder, though you can add one.

The budget EOS M100 has simpler controls than the M6, no hot shoe or EVF option and only 3-axis image stabilisation.